Posted on September 26, 2013 by Mark Vandermaas

COMING…November 9, 2013! Join us for the launch of this book at the 2013 Freedom Symposium; click on the image to register. Free copy included.

You shared the agony of Caledonia’s victims with Christie Blatchford’s best-selling Helpless: Caledonia’s Nightmare Of Fear And Anarchy, And How The Law Failed All Of Us. Now…read VICTORY IN THE NO-GO ZONE, Gary McHale’s account of how a small group of Canadian patriots followed Dr. King’s teachings in order to defend freedom against OPP corruption and, in the process, showed Canadians how to fight back…and win when police refuse to enforce the law. Gary names names as he takes you through some of the critical legal battles leading to criminal charges against senior OPP officers, including Julian Fantino and Chris Lewis. Foreword by Christie Blatchford, endorsements by Jerry Agar, Newstalk 1010, and Barbara Kay, National Post columnist.

Review by University of Ottawa English professor Janice Fiamengo who is also editor of the Freedom Press Canada Journal:

If you want to stop police appeasement of violent radicals in Canada today, or prevent European-style Islamic ‘no-go zones’ from arriving here tomorrow, you need to read the shocking and inspiring story that is Victory In The No-Go Zone. 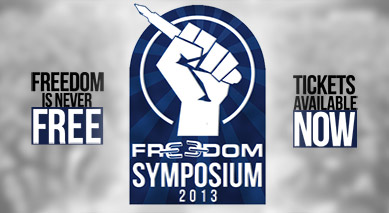 If you’d like to share in the joy…Victory In The No-Go Zone will be released at the Freedom Press Canada 2013  Freedom Symposium, “Freedom in Canada: Tribute or Eulogy?” on November 9th at the Old Mill Inn in Toronto.

Both Gary and Mark Vandermaas, founder of the Caledonia Victims Project, will be speaking along with other freedom advocates/authors/thinkers. Cost is $75 which includes a buffet lunch and a copy of Gary’s book. Please register now to guarantee your seat.

Mark will be talking about the Ipperwash cover-up and its legacy,  a topic to which an entire chapter of Victory In The No-Go Zone is devoted.

Gary, of course, will discuss how he and his supporters fought back against OPP two-tier policing in Caledonia, the application of Dr. King’s teachings, his David & Goliath court battles that saw him make legal history in the area of private prosecutions against OPP brass and militant radicals with no formal legal training, all the while working to overcome a reading and writing disability.

If you cannot attend the symposium, you can pre-order a ‘Signed Copy’ copy of Victory In The No-Go Zone here. 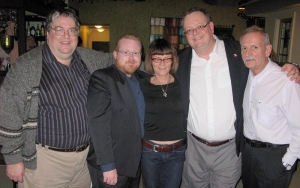 After seven years working working with Gary McHale in Caledonia, this book represents another huge milestone in the quest for the end of racial policing in Ontario. Those who read it will come away stunned that one man, one flawed, ‘ordinary’ man has so much to teach the world about  defending freedom against impossible odds.

There are those who talk about acting, and then there are those who make history. I’m so glad I was privileged to work with a great man in the latter category who taught me everything I know about throwing well-aimed rocks at corrupt, arrogant, lawless, freedom-hating giants.

Congratulations, Gary. This has been a long time coming, and what a ride it’s been!

I am founder of Israel Truth Week, and I'm the 'Liberate Israel Training Guy.' I train pro-Israel advocates in how to use Israel's land title deed-the Mandate For Palestine-as a powerful moral narrative to counter the false 'occupation' vilification. Also, founder of VoiceofCanada.ca and the Caledonia Victims Project.
View all posts by Mark Vandermaas →
This entry was posted in Caledonia activists, Events, Gary McHale, VICTORY IN THE NO-GO ZONE - Gary McHale and tagged Freedom Press Canada, gary mchale, Victory In The No-Go Zone. Bookmark the permalink.