Part 1, ‘White Supremacists – Truth or Fiction?,‘ addresses the attempts to falsely paint non-native activists as racist white supremacists and is reprinted here. Part 2, ‘What Now?‘ will appear in the Teka next week. It will offer specific suggestions for healing the relationship between Caledonia and Six Nations.

Ed. note. Between June 24-30, 2009 the Tekawenakke published several stories in our on-going coverage of the Caledonia conflict which might lead some readers to believe that members of the CANACE (Canadian Advocates for Charter Equality) organization, which has advocated on behalf of the residents of Caledonia, includes members or associates with Neo-Nazi, KKK or other white supremacist ties. The Tekawennake wishes to clarify that we have no evidence that Doug Fleming, Merlyn Kinrade, Gary McHale or Mark Vandermaas are associated with or sympathizers of such groups, and offer the following Op-Ed as the first in a two-part series giving them the opportunity to communicate their purpose and agenda in their own words.

Some supporters of the occupations in Haldimand County have tried to portray Caledonia residents and non-native activists – especially Gary McHale and his supporters – as being racist, anti-native, white supremacists. In the beginning, it was an effective tactic. After all, which journalist, politician or community leader wants to take the chance of being associated with people who hold racist views?

While this tactic was effective it also had the effect of causing Six Nations protesters to lose sight of their own message and instead focus on attacking the character of other people. The mainstream media and the public are now beginning to understand that they have been lied to. This is because – and what is never mentioned by our critics – we have completely rejected the ideology of racism, hate and supremacy, and even our harshest critics have been forced to admit that they have no evidence that we are members, supporters or associates of white supremacist groups.

When Gary McHale and Mark Vandermaas were invited to speak at the recent ‘New Directions in Aboriginal Policy’ forum at Mount Royal University in Calgary they had an opportunity to listen to Wes Elliott present his message of Six Nation Sovereignty and his plan for peace, respect and love. Both McHale and Vandermaas interacted with Mr. Elliott in a respectful way.

Prior to the forum Mr. Vandermaas’ told the organizer: “I am the son of parents who suffered under Nazi-occupation in Holland and so, have a deep and long-held revulsion to doctrines of racial superiority. Mr. McHale is a devout Christian who has repeatedly told me that racism is against the word of God. Mr. McHale and I are not now, nor have we ever been members of white supremacist groups nor have we associated with such groups nor have we ever expressed any support or sympathy for their ideologies because we believe in equality and justice for all people irrespective of race, religion or grievance.”

After McHale and Vandermaas finished their presentations at Mount Royal University a visiting native professor from Ontario told them, “I discovered that you’re not the monsters I had been led to believe you were.”

Mr. McHale, on his website, has condemned any groups that hold to any form of white supremacy doctrine. In fact, the white supremacy group our critics attempt to link us to have actually posted they reject us because McHale “compares all movements like this [white supremacist] one to the Muslim terrorists.”

Kinrade, McHale and Vandermaas are founding members of CANACE (Canadian Advocates for Charter Equality http://www.CANACE.ca) whose principles state, in part, “Every person in Ontario has the right to a life free from racial discrimination and prejudice. All doctrines and practices of racial superiority are scientifically false, morally reprehensible, and socially destructive.”

As reported in the Dunnville Chronicle – but not by the Teka – Mr. Fleming’s opening statement at his public townhall meeting was, “I’m going to be very blunt here. My grandfather’s generation fought a war against Nazi Germany to combat that type of thinking. If any of you here have bought into this racist doctrine, I just want you to know this: I despise your beliefs. I couldn’t disagree with you more, and this is not the group for you.”

Not only have we completely rejected the ideology of racism, hate and supremacy, but neo-nazis have not been seen in Caledonia for more than three years. Our accusers conveniently ignore the fact that neo-nazis appeared in Caledonia before Gary McHale ever became involved. It was not Gary McHale and CANACE who attracted white supremacists to Caledonia, it was the lawlessness of certain native protesters and the lack of police response that attracted them – perhaps thinking they would find fertile ground for spreading their hate. We believe they stopped coming to Caledonia not only because we and the community rejected their repugnant ideology, but also because they rejected ours – our commitment to achieving equality, not superiority. 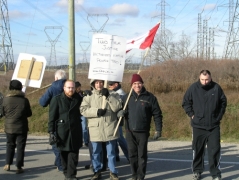 What white supremacist would want to associate with people like us who quote and follow the teachings of Martin Luther King Jr.? Who reject supremacy in favour of equality and respect for all human beings irrespective of race, religion or grievance? Would you want to be part of a movement that ridiculed the KKK and compared them to masked native protesters? Would you follow people who held signs pointing out that native people are also victims of two tier justice – as CANACE founders Mark Vandermaas and Merlyn Kinrade have done?

It has been especially hurtful to Merlyn Kinrade to be accused of being a racist. In his younger days, when he owned the Riverview Dairy, he coached hockey and baseball teams, and made a special effort to include needy children from Six Nations by providing transportation to and from practices and games, purchasing skates and other equipment for them and ensuring they were well fed during their time with the team. As with the now-deceased Judge Marshall – himself an honorary chief of Six Nations – Kinrade’s kindness towards the community was conveniently forgotten in favour of vilification.

We have tried to reach out to Six Nations for help in the past, but the ‘white supremacist’ label made that goal an impossible task. For example, where was the media coverage when Vandermaas publicly spoke out about natives being victims, or when McHale condemned the media for their failure to report the problems of Residential Schools? Both these speeches were given on Oct. 8, 2007 outside the Lion’s Hall in Caledonia, but not one media outlet chose to report their messages.

Hopefully, as more people discover the truth, it will become possible for us to work with people of good will from Six Nations in order to help find a realistic path to healing the two communities. Our next article will offer some suggestions to make this possible.